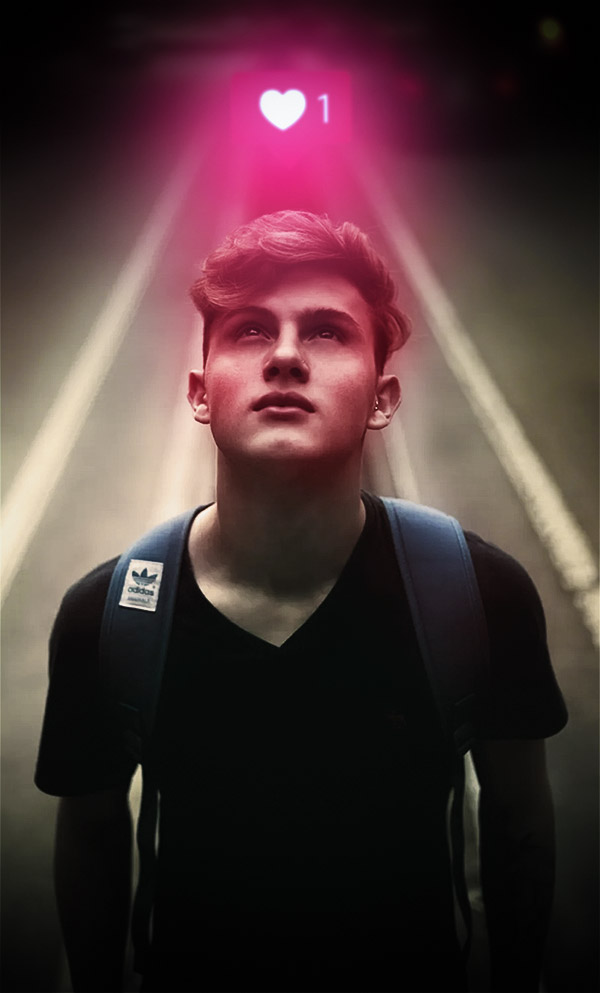 You’ve probably seen this effect on Instagram and wished you could do the same with your photo.  Well! you’re in luck. In this tutorial I’ll should you exactly how you can get the Glowing Icon effect and apply it to your photos.

Before we begin, let’s break this tutorial down:

Step 1. Getting a Photo

This technique will work on any photo. Get a photo of a guy, girl, baby, pet and open your photo in photoshop. For this tutorial I’ve chosen the picture of a college student from pexels.com

We’ll start by adding a Gradient Map Adjustment layer. We will use the default BLACK TO WHITE GRADIENT and set it’s BLENDING MODE to OVERLAY at an OPACITY of 70%.

Adding OVERLAY to a black and white gradient map is a pretty cool way of darkening a photo while bringing out some strong contrast in the photo.

This is how the photo should look. 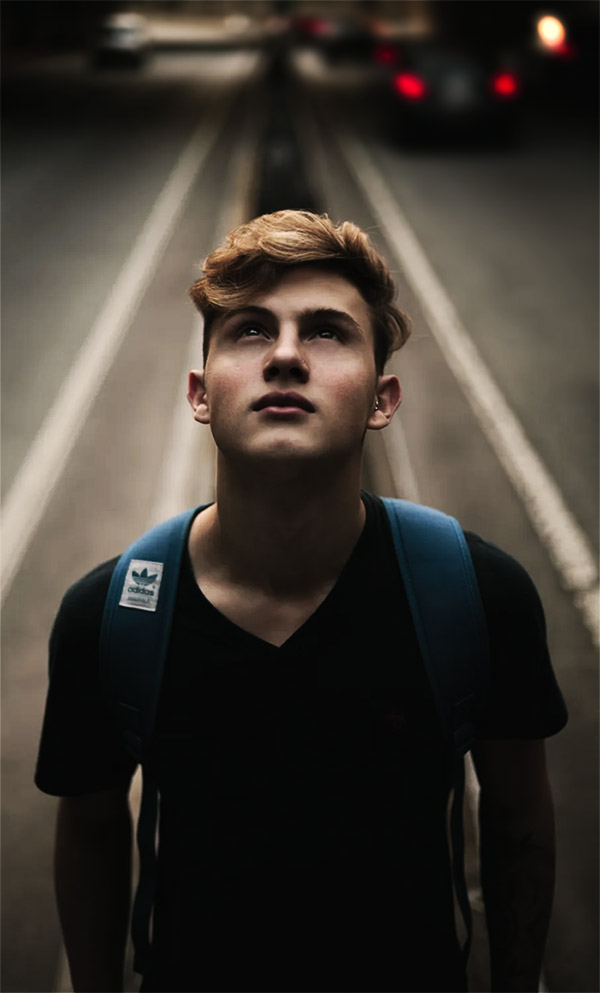 Next I’ll want to darken the upper section of the photo. The cars are a little too bright.

I’ll use a GRADIENT FILL ADJUSTMENT LAYER with BLACK or TRANSPARENT and make the angle 90 degrees so that the black appears at the top. With the settings box/dialog box open I’ll adjust the gradient position by moving the mouse up or down while on the photo. 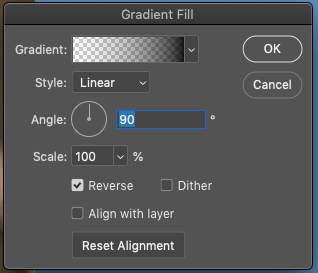 I’ll then place this adjustment layer below the GRADIENT MAP.

I’ll add a VIBRANCE ADJUSTMENT LAYER and crank up the Vibrance to +70 to boost the colors a little. 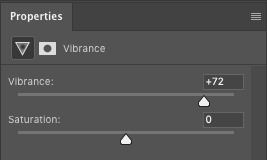 Time for another BLACK & WHITE ADJUSTMENT LAYER to brighten up the scene a bit. Set the BLENDING MODE TO SCREEN with an OPACITY of 40% to 60%.

You can always “Mask Off” the areas where you won’t want the effect of the Black & White Adjustment layer. I masked off the top area because I still wanted the cars to remain dark.

Finally we will add a PHOTO FILTER ADJUSTMENT LAYER with the default Warming Filter. We will increase the density to 54% to bring in those oranges & yellow tones making the scene a little more dramatic. 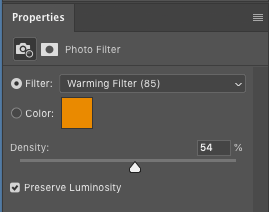 After all those adjustments, this is what our layers panel & Image should look like. 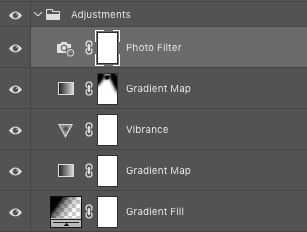 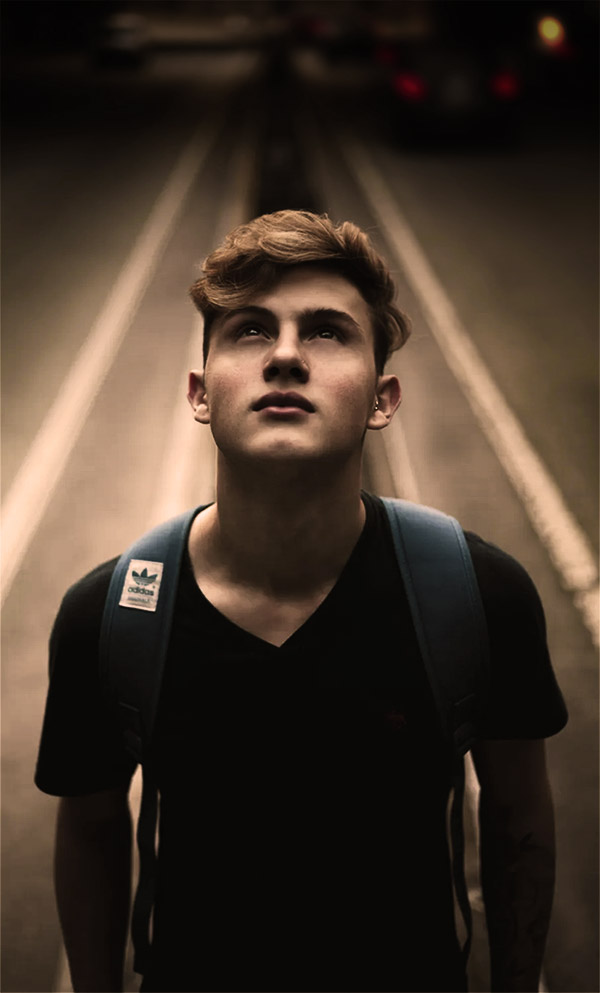 You’ll have the icon in the PSD provided with this tutorial.

Place the icon just above his head so it looks like he’s looking at it. Turn the icon into a smart object so we can apply a few effects non-destructively. 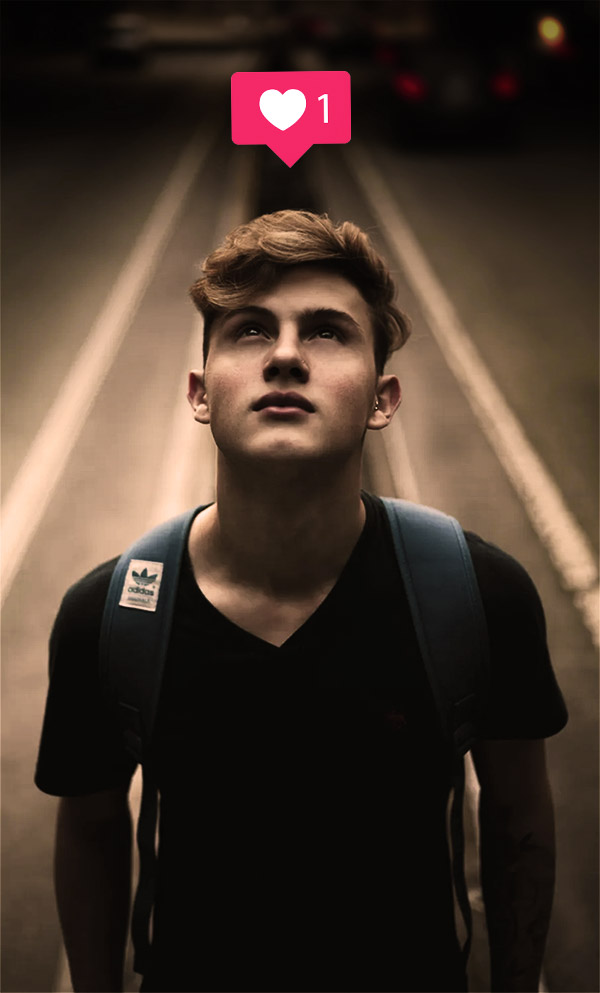 Next I’ll make it a little blurry because in reality when the glows are on top and around an object, the object will never look as sharp. It will look a little blurry.
So, I’ll add a Gaussian Blur of 1.4px to the icon.

I’ll also add a HUE and Saturation (Ctrl+U) and make the icon a little more reddish. Your icon may be red enough which in your case you wouldn’t need to add some Hue & Saturation. 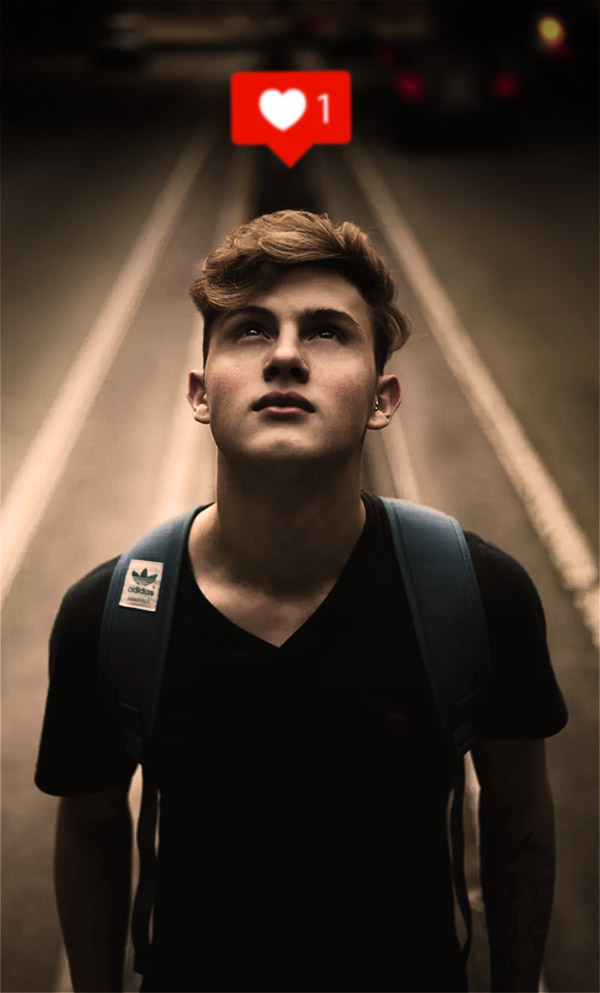 Press B on the Keyboard to bring up the BRUSH TOOL and use #e01350 and the foreground color to paint with.
Make sure the Brush Opacity and Flow are set to 100%

Paint on the ICON. Just left click ONE time to the icon to add the first glow. Repeat till you get a stronger glow. 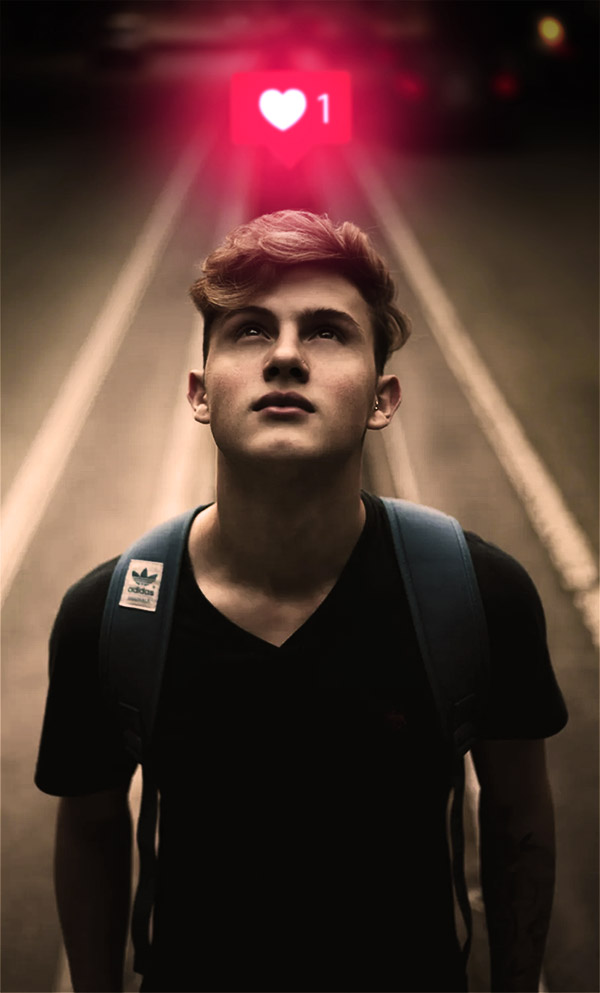 Create a new layer and call it GLOW 2, this time repeat the same process as you did with GLOW 1 only this time you’ll be painting with WHITE instead of #e01350

Set the GLOW 2 layer blending mode to SCREEN with an OPACITY of 80%.

Because our Model is looking at the glowing icon, it’s only natural that the light from the GLOWING ICON will FALL ON HIS HEAD & FACE.  This will make it look more natural and realistic.

Create a new layer and call it GLOW ON FACE

It’s the exact same process as we did with the other glows except we will be sampling the same color as the glow from the icon #e01350 and set the BLENDING MODE to SOFT LIGHT with a BRUSH OPACITY of 50%. We don’t want to much red on his face.

Start painting on his face. 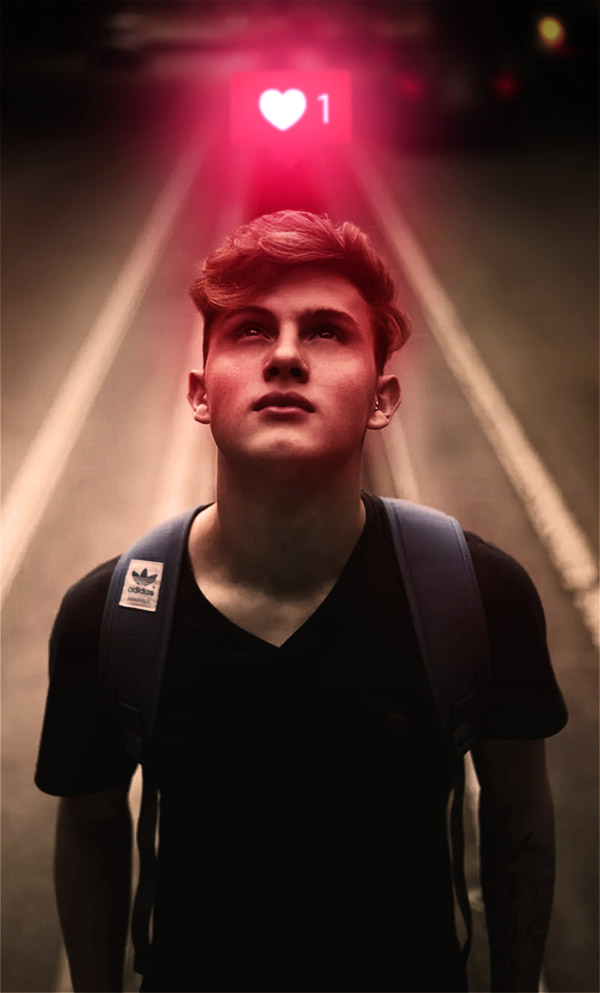 Once you are satisfied with the look. We will add one more final glow.

Create a new layer and call it GLOW 3, this time repeat the same process as you did with the other glows and we will select #fd4d80 as the color. Set the BLENDING MODE TO SCREEN and THE BRUSH OPACITY anywhere from 50% to 60%.

Start painting. Just a few dabs should do the trick. 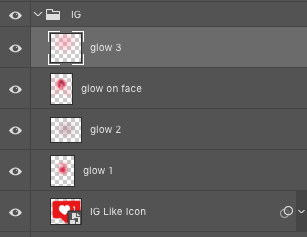 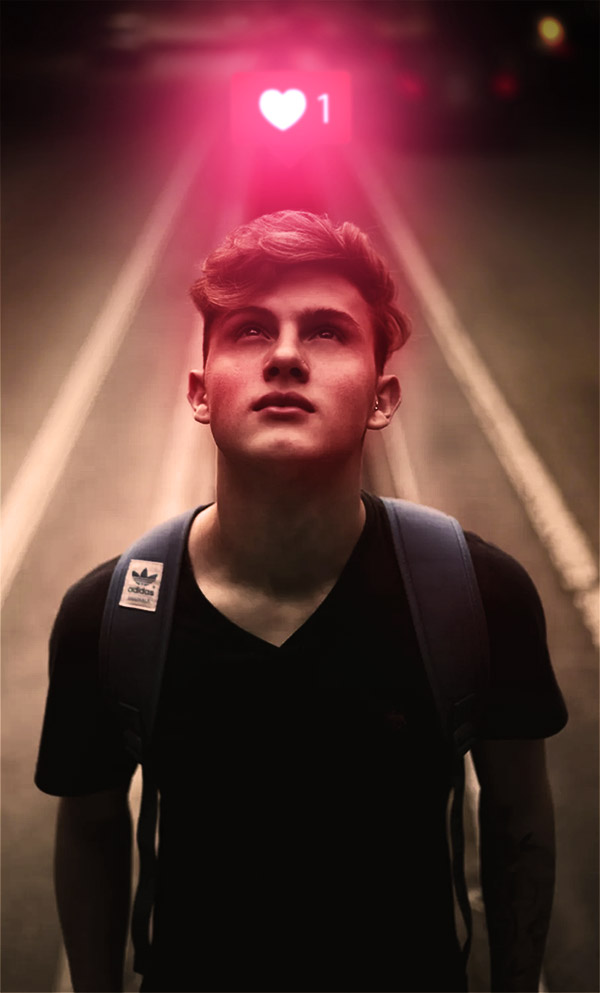 The Camera Raw Filter is a great way to add polish to your composite. Here we will add a vignette and play with a few sliders.

Name the merged layer to Composite and convert it to a smart object so we can apply the CRF non-destructively.

Go to Filter – Camera Raw Filter and use these settings or settings that you feel you like better. Remember ART IS SUBJECTIVE. 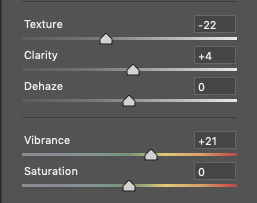 That’s all there is to it. This is a simple way to get that SOCIAL ICON GLOW EFFECT that you’ve been searching for. 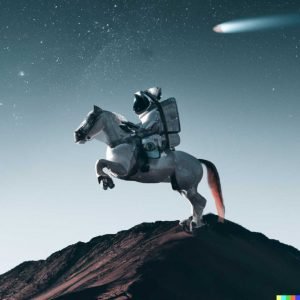 What Is AI Art, and How Does It Work?